MANCHESTER- On March 20th, 2017 ASM hosted a Difficult Airway Course put on by Clinical Team Educator Fred Jeffries of Boston MedFlight. With assistance from co-worker, and Critical Care Transport Paramedic Jen Wheeler, the 8-hour course was attended by ASM employees, as well as members of local fire departments and other healthcare agencies. A comprehensive assessment of anatomy and physiology, case study reviews, demonstration of advanced airway techniques, and the opportunity to perform a surgical cricothyrotomy on a pig trachea include some of the features available to attendees.

Fred Jeffries has presented at ASM on numerous occasions. In addition to the airway course, Fred offers an interactive lecture on 12-lead interpretation as well. Please access ASM’s Webpage for upcoming CME opportunities from BostonMedflight and other great providers. 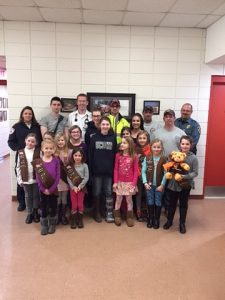 BOLTON-On March 5th, ASM employees were invited to Bolton Fire Department’s Headquarters to present to the town’s local Girl Scout Troop. Paramedic William Schnepp and EMT Tiffany Armas worked alongside FD members offering tips on how to work with emergency personnel. Tours of the ambulance were provided as William and Tiffany discussed ideas on how to avoid and prepare for emergencies. In addition, Girl Scout members received a tutorial on different types of equipment commonly used by EMS and Fire Personnel. 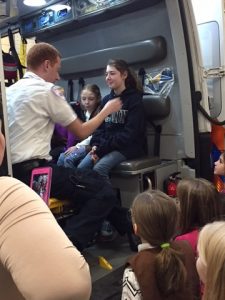 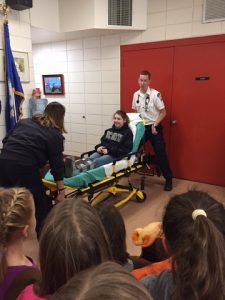 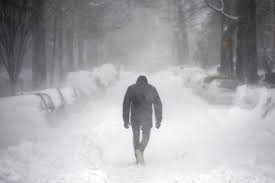 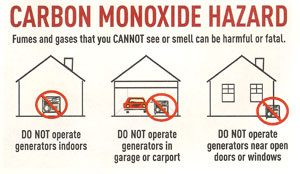 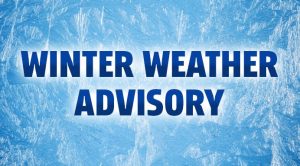 Tuesday Morning: Snow beginning between 4:00 – 6:00 AM and becoming
heavy by 9:00 AM. Blizzard conditions are expected after 9:00 AM with
extremely heavy snow (3” – 4” per hour), Northeast winds gusting to 60
MPH at times with near zero visibilities. A crippling impact on all travel is
expected. Minor coastal flooding is also possible at noontime.
Tuesday Afternoon: Blizzard conditions continue thru the afternoon with 3”
– 4” per hour snowfall rates and winds gusting to 60 MPH at times.
Conditions are expected to start to improve by 4:00 PM as the snow tapers
down to moderate levels and then to light levels by 7:00 PM.
Tuesday Evening: The light snow may continue for a few hours and end
completely by 11:00 PM. However the strong winds may continue into
Tuesday night gusting to 30 MPH at times causing a lot of blowing and
drifting of snow.
Total snowfall: of 18 – 28 inches is currently expected across Western and
Central CT with lesser amounts near the southeast coast of 10” – 15”. The
Department of Emergency Services and Public Protection Division of
Emergency Services and Public Protection will continue to closely monitor
this dangerous storm. Another update will be sent out this afternoon at 2:00
PM once the new model runs are in. 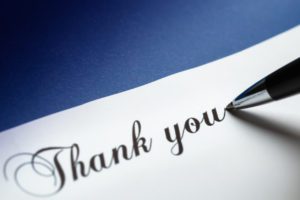 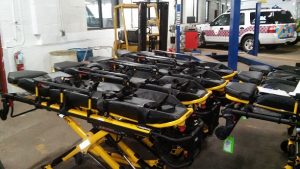 MANCHESTER- On March 7th, 2017, The Ambulance Service of Manchester and Aetna Ambulance received 50 Stryker Power Pro XT Model 6506 Stretchers to be placed into service in the near future.

“This industry- leading ambulance cot utilizes an innovative battery-powered hydraulic system to raise and lower the cot at the touch of a button.” 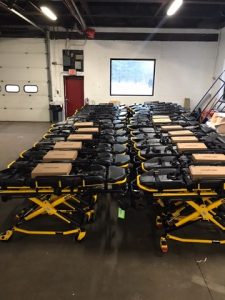 In addition to the numerous advances that come stock with these units, ASM and Aetna will be adding steering-locks as an after-market upgrade that will increase ease of use and maneuverability. The implementation of these new stretchers will help ensure the comfort and safety for both crews and patients alike. Installation for the ASM vehicles should be completed by the end of next week. Aetna should expect to see them in service in early April.

On Monday, February 27th, 2017, The Ambulance Service of Manchester received a Unit Citation during the Town of Vernon Fire Department’s annual award ceremony. As noted in the photo, the accolade was presented due to ASM’s participation in the August 4th, 2016, East Street home explosion. Along with multiple other agencies, ASM was called upon to provide mutual aid. Paramedic Greg Derosier and partner EMT John Bush, along with Paramedic Todd Marshall and partner EMT Stacy DeBarge responded to the scene to provide care and rapid transport to the critically injured residents. The outcome of the incident demonstrates the true benefit that can occur when members of the first responder community work together. 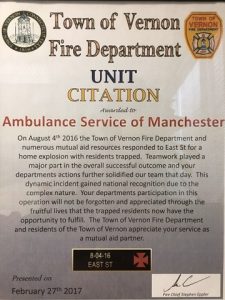 As provided within the citation:

“Your department’s participation in this operation will not be forgotten and appreciated through the fruitful lives that the trapped residents now have the opportunity to fulfill.”

HARTFORD- On February 17th, 2017, Aetna’s Bob Mara was promoted to the position of Field Supervisor. 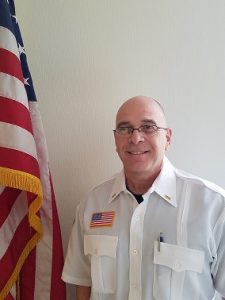 Bob is a graduate of Assumption College in Worcester, MA where he earned a Bachelor’s of Science degree in Psychology and Sociology. He pursued a certification in Advanced Personal Training following graduation, and eventually assumed ownership of a gym in West Hartford. In addition to concentrating on Orthopedic Rehabilitation, Bob had the opportunity to work with professional athletes, and prepare members for fire and police physical agility testing.

In 2006, after 20 years in personal training and 10 years as a volunteer EMT in his hometown, Bob joined Aetna as a full time employee. He has continued to advance his education by taking numerous courses in the study of biology, chemistry and mathematics. He has persistently demonstrated his commitment and value to the company by becoming cross-trained as a Dispatcher, assisting new employees as Field Training Officer, and serving as a Union Steward mediating conversations between employees and management.

On behalf of the Aetna family, we would like to congratulate Bob on his promotion and look forward to great things from him.