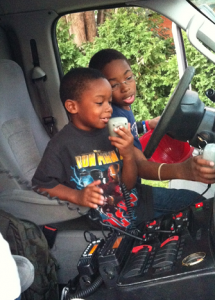 HARTFORD — On August 8, 2012 Aetna sent EMTs Jordan Smith and Jason Basora to represent the company at The Boys and Girls Club of Hartford’s National Night Out. According to information provided by the Asylum Hill club:

…this night allows community members, families, neighbors, young people, and Police to come together, celebrate, and promote neighborhood spirit and police-community partnerships in our fight for a safer neighborhood and safer nation.

National Night Out, a year-long community building campaign, is designed to: (1) Heighten crime prevention awareness; (2) Generate support for, and participation in, local anticrime programs; (3) Strengthen neighborhood spirit and police-community partnerships; and (4) Send a message to criminals letting them know that neighborhoods are organized and fighting back.

Along with the traditional outside lights and front porch vigils, most cities and towns celebrate National Night Out with a variety of special citywide and neighborhood events such as block parties, cookouts, parades, festivals, visits from local officials and law enforcement, safety fairs, and youth events.