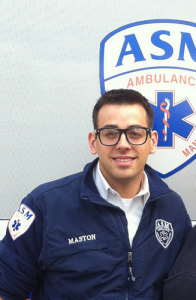 At the age of 28-years-old this is my tenth year in the pre-hospital emergency medical system.  I got my start at Thomaston Volunteer Ambulance Corps (TVAC) at the age of 18.   Five months after joining TVAC I completed an Emergency Medical Technician (EMT) course and proudly acquired my EMT certification.  Over the next two years as a member of TVAC I gained my EMT-Intermediate level through more education and became an advisor of TVAC’s Explorer post.

In August, 2003 I was employed by an EMS Management and Staffing Service.  My role included staffing Volunteer Ambulance companies throughout the state of Connecticut.  By staffing twelve different volunteer ambulance associations and receiving medical control through seven hospitals my knowledge and adaptability was expanded upon. To further my education I enrolled in the 2005-2006 Hartford Hospital Paramedic Program. Shortly after entry into the program I was promoted to Regional Manager at the management service.  Daily responsibilities included hiring, scheduling, and discipline. I also acted as liaison between Volunteer Ambulance Management and owners the management service.

May of 2006, I graduating paramedic school and obtained my national and state license. After graduation I accepted a paramedic position at the Ambulance Services of Manchester (ASM).  Six years later, I have had tremendous growth alongside ASM.  My employment at ASM has offered me the opportunity to put my skills to work on a wide variety of calls.  They include (but are not limited to): Paramedic intercepts, emergency transports, non-emergent transports, critical-care transports, and the opportunity to work alongside Connecticut Children’s Medical Center’s Transport Team.

Two years ago I was promoted to the role of Supervisor.  This promotion has given me the opportunity to work closely with all areas of the company and granted me the ability to perform community outreach.  On a regulator basis I have the opportunity to conduct lectures for high school students from many different schools and towns about the different aspects of and potential career opportunities in EMS.  Thanks to the support of both management and my colleagues here at ASM, I have been able to accomplish many of my professional goals.

I currently reside in the Bishop’s Corner neighborhood of West Hartford.  I am also a full-time student with a chosen major in bio-molecular science. My hobbies include running, swimming, and cycling.  This year I will be running both the Burlington, VT and Hartford, CT Marathons.  Eventually I’m hoping to compete at the 2013 Lack Placid Ironman.