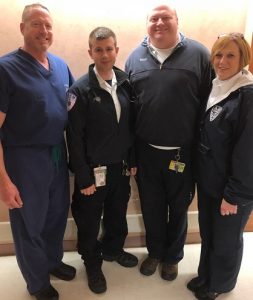 MANCHESTER – As of January 30th, 2018, ASM’s Chris Myska has been cleared by Eastern Connecticut Health Network medical control for independent dispatch as a paramedic to the towns that ASM serves. His preceptors were Paramedic Supervisor Tim Lachappelle and Paramedic Mike Levasseur. Chris was hired at the Ambulance Service of Manchester in July, 2017 and graduated from the Capital Community College Paramedic Program. He arrives to the organization with a great deal of previous experience, having spent 8 years in the US Air Force, where he serves as an Aeromedical Evacuation Specialist in the grade of Technical Sergeant. He is a combat veteran, having served multiple deployments in the Global War on Terror. He also brings the experience of a 5-year tenure as an Emergency Department Medical Technician at Connecticut Children’s Medical Center in Hartford.

As with all precepting phases at ASM, his final approval came from Eastern Connecticut Health Network after shadowing him and his preceptors in the field as they responded to emergency calls.On behalf of the ASM Family, we would like to wish Chris the best of luck and say we are very proud to have such skilled professionals on staff.