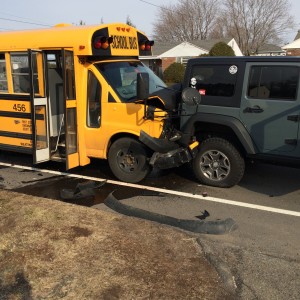 by Christine Dempsey and David Moran

WETHERSFIELD — About a dozen children have been sent to area hospitals after a school bus crash.

Police, firefighters and seven ambulances were dispatched to the scene, 52 Prospect Street, shortly before 8:50 a.m., according to an ambulance company spokesman.

The crash has been declared a “mass casualty incident,” with all students on the bus being transported to hospitals, said David Skoczulek of Aetna Ambulance Service, Inc.

The small bus appears to have collided with a Jeep Wrangler, which struck another car. The third vehicle then hit a fourth car.

The school bus reportedly collided with two cars, Skoczulek said. The extent of injuries is unknown.

The term “mass casualty incident” means that more resources are needed because of the number of patients. It doesn’t speak to the extent of injuries, Skoczulek said.