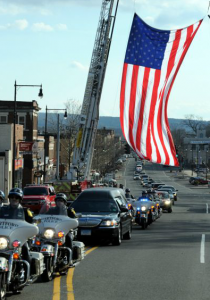 John Marvin, 28, died in a car accident in the early morning hours of January 27, 2012. John was an Emergency Medical Technician for the Ambulance Service of Manchester from 2008-2009 prior to his selection as a police officer for Hartford Police Department. Our heart goes out to the Marvin family. We also extend our condolences to the Hartford Police Department who lost a family member and friend.

Many stories about John’s professionalism, good nature and attention to detail have been going around ASM today. One ASM employee told of how on his very first day John was found by his partner to be checking the ambulance’s oil. Those in the business know that’s above and beyond and thoroughly professional.

John was held in high regard by the ASM family and he will be missed. Share a story about John by clicking “Leave a reply” below.

As you may have heard, Hartford Police Officer John Marvin was killed in a motor vehicle accident early today. Many of you may have known John as he worked for ASM from October 2008 through December 2009.

We will be collecting cash donations to help his family with expenses at this tragic time.

If you wish to contribute, there will be a jar at the Holiday Party tomorrow evening. In addition, I have an envelope in my office. All money collected will be sent directly to his family.

Read the Courant article about the accident here…