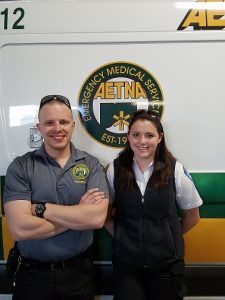 HARTFORD – As of May 23rd, 2017, Aetna’s Cora Gingras has been cleared by Hartford Hospital medical control for independent dispatch as a paramedic to the towns that Aetna serves. Her preceptor was Paramedic Greg Kendall. Cora started at Aetna in December of 2016. She graduated from the Goodwin College/Hartford Hospital Paramedic Program after studying psychology at Eastern Connecticut State University. As with all precepting phases at Aetna, Cora’s final approval came from Hartford Hospital after shadowing her and her preceptor in the field as they responded to emergency calls.

On behalf of the Aetna Family, we would like to wish Cora the best of luck and say we are very proud to have such skilled professionals on staff.