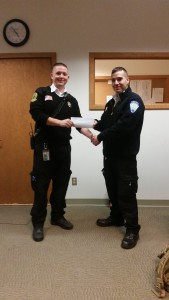 HARTFORD –  As of December 19, 2015, Aetna’s Joshua Pearson has been cleared by Hartford Hospital medical control for independent dispatch as a paramedic to the towns that Aetna serves.

Josh started at Aetna in April of 2013 and graduated from the Paramedic Studies Program at Capital Community College. His preceptor was Paramedic and Field Supervisor Matt Campbell. The full precepting phase can take ten to 12 weeks or more as the paramedic is prepped for the realities of the field. Josh served in the United States Navy for four years.

As with all precepting phases at Aetna, Josh’s final approval came from Hartford Hospital after shadowing him and his preceptor in the field as they responded to emergency calls.

On behalf of the Aetna Family, we would like to wish Josh the best of luck and say we are very proud to have such skilled professionals on staff.