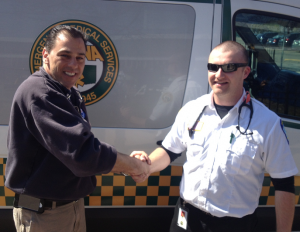 HARTFORD – As of April 5, 2013, Aetna’s Sean Piscopiello has been cleared by Hartford Hospital medical control for independent dispatch as a paramedic to the towns that Aetna serves.

The full precepting phase can take ten to 12 weeks or more as the paramedic is prepped for the realities of the field. As with all precepting phases at Aetna, Sean’s final approval came from Hartford Hospital via Greg Berryman after shadowing Sean and his preceptor in the field as they responded to emergency calls.

Sean is 27 years old and spent four years in the Army as a cavalry scout with two deployments to Iraq. He became an EMT in 2008 and has worked full time since then. He is a graduate of Hartford Hospital’s Paramedic Program.

On behalf of the Aetna Family, we would like to wish Sean the best of luck and say we are very proud to have such skilled professionals on staff.