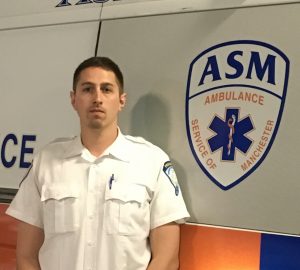 MANCHESTER –  As of May 23, 2016, ASM’s Jared Krajewski has been cleared by Eastern Connecticut Health Network medical control for independent dispatch as a paramedic to the towns that ASM serves. His preceptors were Paramedic Supervisor Bob O’Neil and Paramedic Don Hart.

Jared started at ASM in August of 2013. He graduated from the Capital Community College Paramedic program. Jared has volunteered for the Bolton Volunteer Fire Department and worked in the Intensive Care Unit in Manchester Memorial Hospital.

As with all precepting phases at ASM, Jared’s final approval came from Eastern Connecticut Health Network after shadowing him and his preceptors in the field as they responded to emergency calls.

On behalf of the ASM Family, we would like to wish Jared the best of luck and say we are very proud to have such skilled professionals on staff.