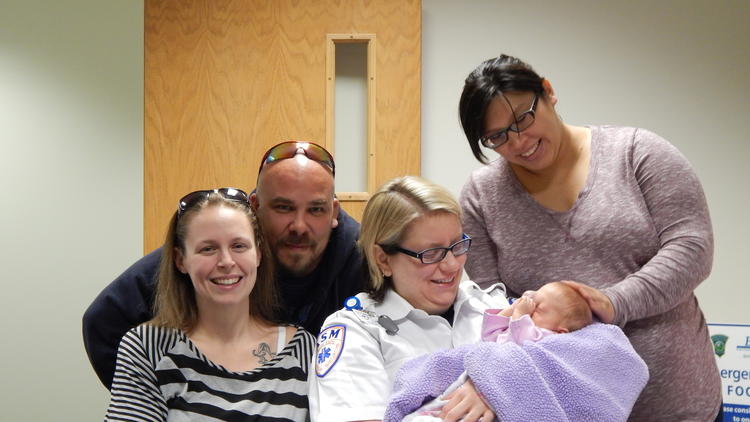 MANCHESTER — Andy and Jamie Deschene had to make a quick decision on the night of Sept. 5.

Pregnant with her second child, but not due to deliver until Nov. 9, Jamie Deschene, 30, was having labor contractions when she called Andy at work and told him to hurry home. A doctor at St. Francis Hospital and Medical Center in Hartford told the couple that if they could make it to the hospital from their Bolton home in 20 minutes, they could drive. If not, the physician advised, call an ambulance.

Jamie’s water had not broken, and the Deschenes decided to drive. Her water broke on I-384 near the Spencer Street exit.

Soon after, the infant’s feet emerged, and the couple were faced with a potentially dangerous breach birth in their car. Andy pulled off on Exit 56 of I-84 and called 911. The off-ramp was soon bustling with state troopers, East Hartford firefighters and medics from Ambulance Service of Manchester.

Pregnant herself, ASM emergency medical technician Julie Bissell had answered four or five maternity calls within the past month. Each patient’s due date was closer than the one before, Bissell said. On the last call before the Deschenes’ emergency, the woman’s water broke on the ambulance stretcher.

Andy Deschene made his 911 call at 7:42 p.m. Within minutes, East Hartford firefighter/paramedic Tamarah Collins and firefighter Judith Geier joined Bissell and ASM paramedic supervisor Beth Sheils at the scene. They secured Jamie Deschene for transport and headed to Hartford. Read the rest of the story here…