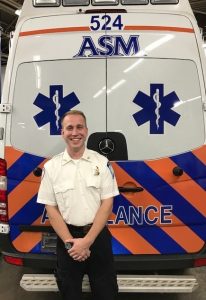 MANCHESTER — On July 17th, 2017 ASM’s David Pozniak was promoted to the position of Field Supervisor. His remarkable dedication to both his patients and co-workers has been consistent throughout his career at ASM. He has developed into a role model for health care professionals and continues to positively influence everyone he interacts with.

Dave expressed his gratitude for the well-deserved promotion by stating the following:

Having started as a brand new EMT seven years ago, I have been witness to our continued growth and expansion in the communities we serve. ASM has remained on the cutting edge of care in the ever evolving field of EMS. I am honored and humbled to become part of the supervisor team and look forward to working with everyone to continue making ASM a great place to work.

On behalf of the ASM family we would like to congratulate Dave on his promotion and look forward to great things from him.