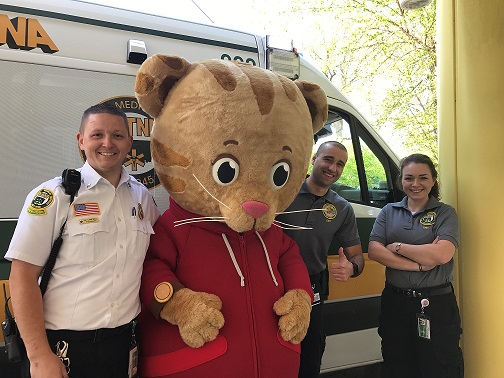 HARTFORD — On May 6, 2017 Aetna Ambulance Service attended a Daniel Tiger’s Neighborhood themed “Touch a Truck” event held at CPBN Television Station on Asylum Avenue in Hartford. The event, organized by a group of military veterans, encouraged kids to interact with Police, Fire, and EMS personnel in order to gain a sense of familiarity with first responders. Event Coordinator James Reeves’s motivation for the project was “creating, coordinating, and executing a family-friendly event that highlights the importance for children and families to “be a good neighbor” and become more involved in their communities.”  Mr. Reeves also stated “we feel that kids should be unafraid of those in uniform to the point that they can communicate freely and openly, especially in times of urgent need.”

Aetna Field Supervisor Matt Campbell, and EMT’s Alexandra Zhakov and Anthony Mazzola provided ambulance tours and the entertainment for those in attendance, giving out coloring books and posing for pictures.