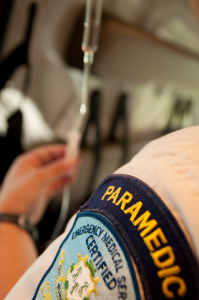 Why did the EMTs (ambulance) and Paramedics arrive separately?

EMTs are able to perform a specific set of skills that do not include such advanced treatments as IVs, EKG heart monitoring, IV medications, advanced airway techniques, nebulizers and more. Paramedics are required in the treatment of patients with chest pain, difficulty breathing, altered mental status, severe accidents and injuries and many other types of medical emergencies.

Simply put, when a 911 call is received that meets certain criteria, an EMT level ambulance (BLS) and a paramedic service (ALS) are dispatched simultaneously. Upon arrival, if the patient needs any of the treatment listed above, the paramedic will then ride END_OF_DOCUMENT_TOKEN_TO_BE_REPLACED

“I was surfing the Internet and chanced upon Aetna Ambulance’s page. I was sorry to learn of the passing of Herman and Jean Grady. I knew them back in the late ’70s and early ’80s when I was employed as Communications Coordinator for the North Central Connecticut EMS Council. Of all the ambulance providers I knew and worked with, they were about the nicest and most cooperative folks you could ever have hoped to meet.”

BOLTON, CT – Brownie Troops 10635 and 10636 in Bolton (about 40 second and third graders) are currently working on earning a First Aid Badge.  One of the requirements is to speak with a First Responder and Troop Leaders expressed that the girls were really interested in seeing an ambulance.

“On behalf of Brownie Troops 10635 and 10636, I would like to thank you for your teams for their time.  The girls really enjoyed asking questions and have gained a real appreciation for the responsibilities of First Responders. Thank you again.”

NOTE: Within the Town of Bolton, ASM responds to medical emergencies in conjunction and cooperation with Bolton Fire Department (BFD). ASM provides ambulance and paramedic services for requests that come in via the 911 system. BFD is the designated First Responder and provides all rescue and fire suppression services to the Town of Bolton. In the event of an emergency, always dial 911.

The final total for the Manchester team:

The final totals for the entire Emergency of Hunger Food Drive for 2012, including Manchester, Rockville, South Windsor, Vernon and Windsor:

The Food Bank at MACC Charities: Before and After

Click for the latest Hartford Courant article on the Food Drive…

To Reach the Goals, the Second Weekend Must Total:

* The second weekend adds an additional town with its two locations. END_OF_DOCUMENT_TOKEN_TO_BE_REPLACED 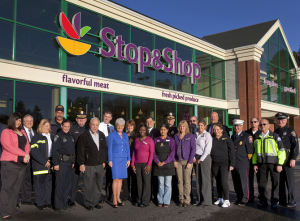 By MICHAEL WALSH, Special to The Hartford Courant
MANCHESTER ——

The fourth annual Emergency of Hunger Food Drive, a community staple in the Manchester area since its 2009 debut, serves much more than helping the town prepare for the holiday season.

While more than 1,000 Thanksgiving turkeys are donated each year to the food drive, which is organized locally by the Ambulance Service of Manchester, those who see hunger first-hand say the food drive allows food pantries to remain stocked in the slower winter months. END_OF_DOCUMENT_TOKEN_TO_BE_REPLACED

HARTFORD — A recent patient satisfaction survey received by Aetna Ambulance Service was full of praise for the crew and care received, but the patient had a question about the cost of services: Who sets the rates the ambulance service charges for transport or paramedic services?

Aetna and ASM are licensed Connecticut ambulance services. As such, our companies are regulated by the Connecticut Department of Public Health (DPH). The rates for each individual service category are issued to us by DPH and we do not have the discretion to set our own rates or billing categories or make any changes. The bills that are issued to patients for services rendered are produced with these set rates and cannot be higher. END_OF_DOCUMENT_TOKEN_TO_BE_REPLACED 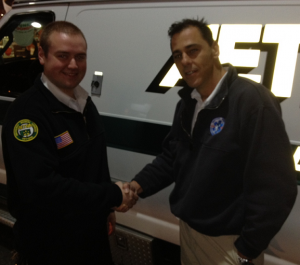 HARTFORD – As of November 1, 2012, Aetna’s Taylor Salva has been cleared by Hartford Hospital medical control for independent dispatch as a paramedic to the towns that Aetna serves.

His preceptor was Robert Velletri. The full precepting phase can take ten to 12 weeks or more as the paramedic is prepped for the realities of the field. As with all precepting phases at Aetna, Taylor’s final approval came from Hartford Hospital after shadowing Taylor and his preceptor in the field as they responded to emergency calls.

Taylor is a new, full time Paramedic who graduated from Capital Community College one year ago. He has lived in the New London/Groton area all his life, until he, his wife, daughter and step daughter recently moved to Griswold. He enjoys boating, fishing and shooting. He has worked as an EMT basic, a firefighter, and ER technician for some time now and is excited to start his paramedic career.

On behalf of the Aetna Family, we would like to wish Taylor the best of luck and say we are very proud to have such skilled professionals on staff. 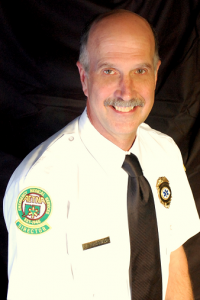 As I prepare to leave Aetna Ambulance Service I look back at the many wonderful people that I have had the pleasure to know and to work with. Aetna has always been known as a “family” and I have seen and experienced this first hand.  It was an honor for me to have known both Jean and Ethel Grady. This family truly loved their community and always stood ready to help anyone in need.

Aetna Ambulance has excelled over the years and today it is known as one of the best ambulance companies in the state.  It is widely respected by the hospitals and facilities that we serve. It has become the sought after place to work for EMT’s and Paramedics coming out of school. Our reputation is based not only upon the dedication and excellence in patient care but the family atmosphere that lives on today.

My time here has been a great experience and I have enjoyed coming to work every day. I will miss the many people that I have worked with both here and the Ambulance Service of Manchester.   I am proud to say that it has been an honor for me to be a part of this organization. 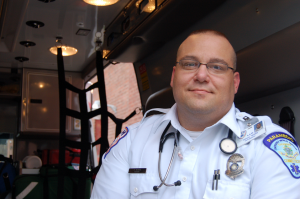 MANCHESTER – As of November 1, 2012, ASM’s Josh Traber has been cleared by Eastern Connecticut Health Network medical control for independent dispatch as a paramedic to the towns that ASM serves.

His preceptors were Supervisor-Paramedics Vinnie Maston and Melissa Osborne. The full precepting phase can take ten to 12 weeks or more as the paramedic is prepped for the realities of the field. As with all precepting phases at ASM, Josh’s final approval came from Eastern Connecticut Health Network after shadowing Josh and his preceptor in the field as they responded to emergency calls.

Josh started at ASM in 1999 as a Communications Dispatcher. He obtained his EMT in 2000 and started Capital Community College’s Paramedic Program in 2011.

On behalf of the ASM Family, we would like to wish Josh the best of luck and say we are very proud to have such skilled professionals on staff.

Meet the Newest Members of the Team: ASM Hires Five