MANCHESTER — On December 29, 2016, ASM’s Josh Traber was promoted to the position of Field Supervisor. His remarkable dedication to both his patients and co-workers has been consistent throughout his career at ASM. He has developed into a role model for health care professionals and continues to positively influence everyone he interacts with. 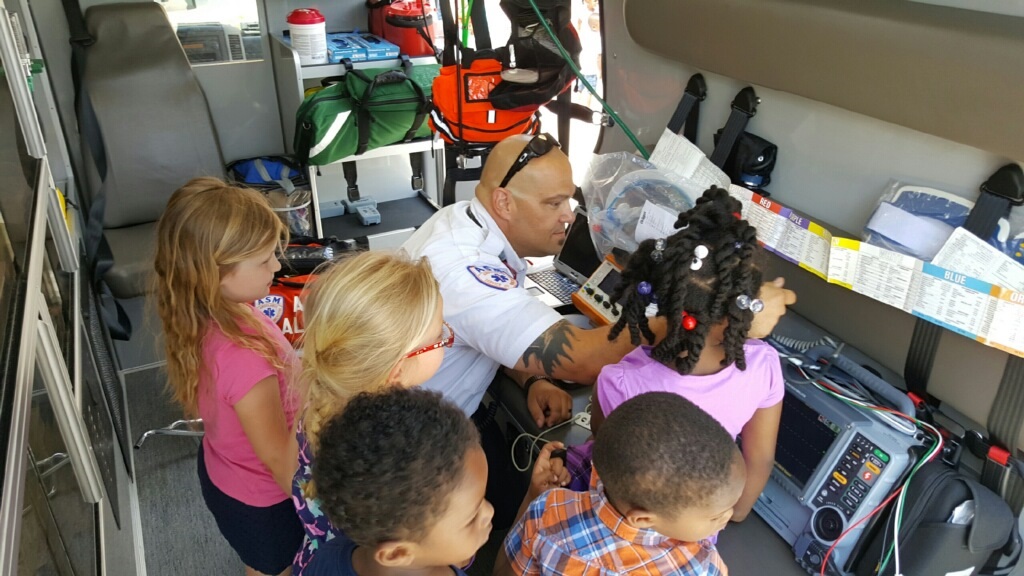 Josh expressed his gratitude for the well-deserved promotion by stating the following:

“I just wanted to take a minute to thank everyone for welcoming me in my new role as supervisor. I have worked for ASM for 17 years and have performed duties ranging from dispatcher to Paramedic Preceptor. ASM is known for exceptional patient care, with outstanding professionalism. These are the core values I hope to continue in my new role.
For those of you I haven’t worked with, I look forward to getting to know you in the near future. Please feel free to let me know how I can assist you with any problems you may be encountering.”

On behalf of the ASM family we would like to congratulate Josh on his promotion and look forward to great things from him. 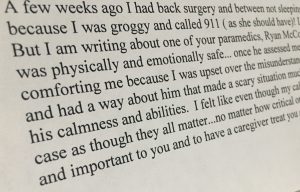 South Windsor –  In early December, Ambulance Service of Manchester received an email containing a warm thank you for Paramedic Ryan McConville. The note, as depicted below, is in regards to a transport completed a few weeks prior.

A few weeks ago I had back surgery and between not sleeping and the pain meds  ..my daughter got nervous because I was groggy and called 911 ( as she should have)! I ended up being ok and  things turned out fine.

But I am writing about one of your paramedics, Ryan McConville. He went above and beyond to make sure  I was physically and emotionally safe… once he assessed me and determined I was stable he spent time comforting me because I was upset over the misunderstanding.  He was professional, extremely knowledgeable, and had a way about him that made a scary situation much less so for my family and myself. I will never forget his calmness and abilities.  I felt like even though my call was not of a serious matter… I think he he treats each case as though they all matter…no matter how critical or not. When you are laying on that stretcher it is scary and important to you and to have a caregiver treat you as though you matter is priceless.

People always write to complain but not as much to compliment.  So I wanted to take a few minutes to let you know what an asset you have to your team.  I will never forget his kindness and professionalism. 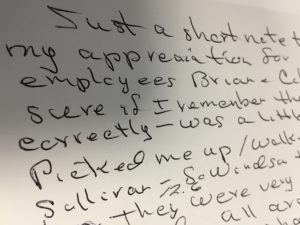 SOUTH WINDSOR – In early December, Aetna Ambulance received a hand written thank you letter addressed to Paramedic Ryan Gonska and EMT Cole Ashker. The note, as depicted below, is in regards to a transport completed a few days prior.

Just a short note to express my appreciation for 2 of your employees [Ryan] and Cole. [They] picked me up [at a] walk-in clinic [and brought me] to St. Francis Hospital. They were very professional and kind. All around good guys. Thank you.

HARTFORD –  On December 10, 2016, Aetna Ambulance received a letter from Hartford Hospital’s Management Team, regarding the exceptional actions of Paramedic, Nick Foran. After noticing his kind gesture (depicted below), Karen Teixeira, a triage nurse, drafted a letter to the Hospital’s Management Team. Her letter prompted an outpouring of gratitude and self reflection from Danette Alexander, Nurse Director of Emergency Services. Read both the letter and note below.

The letter from Karen Teixeira:

A medic from Aetna brought in a homeless man tonight that was seen and  released.  Later, this medic came up to me asking where the patient was; I looked in the tracker and told him that it looked like the patient had been discharged. He was disappointed.  He then told me that the patient was homeless and that all of his clothes were wet, especially his gloves. I noticed the pair of gloves in this medic’s hand.  I asked him if they were for the patient, he said they were. I told him that he may be in the waiting room because we typically allow homeless patients to stay in the reception area if the weather is cold.  He proceeded to look in the waiting room and found the patient. He was relieved that he was able to find the gentleman to give him a pair of dry gloves so that he wouldn’t get frost bite.

The note from Danette:

This is a beautiful story.

I believe it is our mission:  To help.  To help in any way we can.  It is not a little thing to allow the homeless a warm shelter—even for just a few hours.

The empathy shown by this medic was not a little thing.

It is the only thing.

I try to learn each day so I can be a better person.  Not just for me or my family, not just for all of you but I try to be better so I can help those who need us most.

Sometime it is overwhelming to look at all the people who need us. It is often daunting to the ED; the needs of all the service lines and the patients who makeup each of these patient populations.   It is disheartening to listen to feedback from people that feel we fell short of their expectations.

But you need to know how proud I am of all of you and the work you do every day.  Try not to be overwhelmed.  We will help each patient.  One at a time and do the best we can.

Just keep looking at the one.  We will be ok. 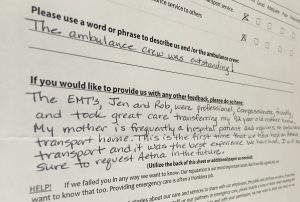 FARMINGTON – December 2016, EMTs Jennifer Grayson and Roberto Rizza received high praise recently from a patient’s daughter following a transport to her home. Aetna Ambulance sends Patient Satisfaction Surveys to a randomly selected group of patients, allowing them the opportunity to provide feedback about their ambulance transport.  The last section of the survey allows the patient, or family member, to write about their experience.  In this section, the daughter boasts of professionalism, compassion and friendliness. She goes on to say, “it was the best experience we have had.”

The EMTs, Jen and Rob, were professional, compassionate, friendly, and took care of transferring my 92 year old mother home. My mother is frequently a hospital patient and requires an ambulance transport home. This is the first time that we have had an Aetna transport and it was the best experience we have had. I will be sure to request Aetna in the future. 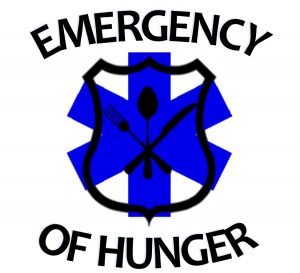 MANCHESTER – The 8th Annual “Emergency of Hunger” Food Drive, composed of first responders, Rotary members, and others, was a great success! Their combined efforts continue to make a deep and widening impact on hunger in greater Hartford. This year volunteers from Manchester, Vernon, South Windsor, Windsor, and Stop & Shop Supermarkets collected a staggering 34,000+ food items, 650+ turkeys, and almost $16,000 in gift card and monitory donations.

Thanks to the wonderful generosity of the community over the last eight years, we have been able to collect a total of 247,000+ food items, 7,000+ turkeys, and over $159,500 in gift card and monitory donations.