The 2016 Toy Drive was again a great success. Below you will find a collage of pictures from the days spent collecting toys for Connecticut Children’s Medical Center. 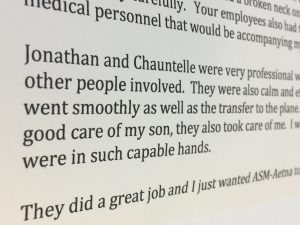 MANCHESTER – In late September Ambulance Service of Manchester received a letter of praise for EMT Jonathan Bush and EMT Chauntelle Masslon from the mother of a patient that they transported from a facility to Brainard Airport.

“I am writing to commend two of your employees – Jonathan Bush and Chauntelle Masslon who, on [a date in September], transferred my son from [a facility in Hartford] to Brainard Airport for a flight to [a facility in New Jersey]. My son suffered a [neck injury] on [a date in September] and had to be handled very carefully. Your employees also had to work side by side with the medical personnel that would be accompanying my son on the plane.

Jonathan and Chauntelle were very professional while dealing with my son and the other people involved. They were so calm and efficient. The drive to the airport went smoothly as well as the transfer to the plane. Not only did they tak good care of my son, they also took care of me. I was grateful to that my son and I were in such capable hands.

They did a great job and I just wanted [ASM] to know that.”

Meet the Newest Members of the Aetna Team