EAST HARTFORD — On August 20, 2014, two crews from ASM assisted with Vice President Joe Biden’s visit to Connecticut by being part of the motorcade and standing by at Goodwin College in East Hartford. Pictures are attached, care of Dan Hammett and Jason Bak. A special thanks to East Hartford Fire Department for their partnership. 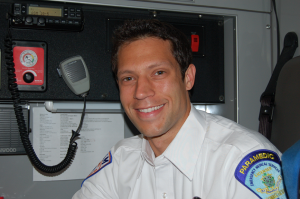 MANCHESTER — In May 2013, ASM received a Patient Satisfaction Survey related to a paramedic intercept performed by ASM Paramedic Jason Bak, while completing his precepting phase. The patient checked all of the Strongly Agree boxes and wrote in the word “Wonderful” to describe the service. Additionally he hand wrote the following:

“Jason, the [Paramedic] who came onto the ambulance was amazing. He made me feel very comfortable, that is, I felt safe and in the good hands of someone qualified. He was very reassuring and should be recognized as a very valuable person on your staff.” 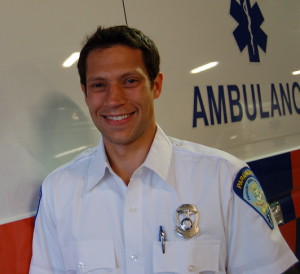 MANCHESTER – As of May 15, 2013, ASM’s Jason Bak has been cleared by Eastern Connecticut Health Network medical control for independent dispatch as a paramedic to the towns that ASM serves.

Jason’s preceptors were Paramedics Mike Panciera and Don Hart. The full precepting phase can take ten to 12 weeks or more as the paramedic is prepped for the realities of the field. As with all precepting phases at ASM, Jason’s final approval came from Eastern Connecticut Health Network after shadowing Jason and his preceptor in the field as they responded to emergency calls.

Jason started at ASM as an EMT-Basic in December of 2007, has a Bachelor’s of Science from the University of New Haven and graduated from Goodwin College/Hartford Hospital Paramedic Program.

On behalf of the ASM Family, we would like to wish Jason the best of luck and say we are very proud to have such skilled professionals on staff.