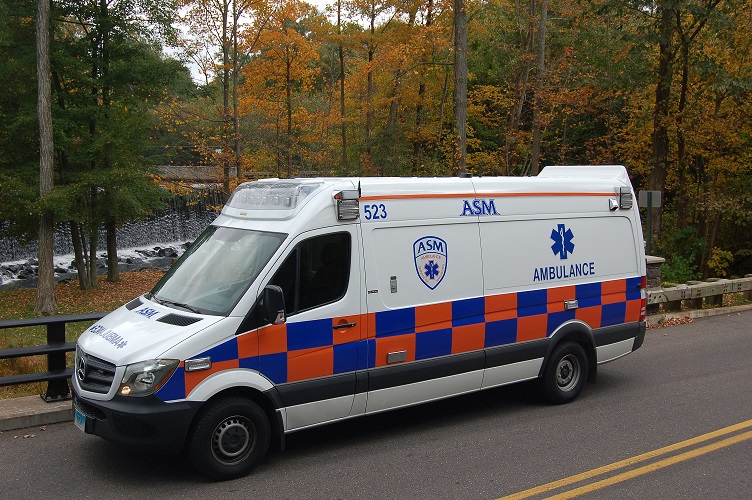 HARTFORD and MANCHESTER, Connecticut — Recently Aetna Ambulance Service and the Ambulance Service of Manchester took delivery of two new bariatric Mercedes Sprinter Ambulances from American Emergency Vehicles (AEV) increasing the overall bariatric fleet to four vehicles. The new ambulances have an upgraded design with a longer wheel base and larger load capacity. ASM and Aetna firmly believe that the ergonomic advancements will improve both patient care and comfort. As with our previous bariatric ambulances, each new unit is equipped with Stryker Power-LOAD stretcher lift systems capable of lifting a maximum patient weight of 700 pounds. Fitting our bariatric vehicles with the Power-LOAD stretcher lift system is part of Aetna and ASM’s long-term commitment to the safety of our patients and employees. 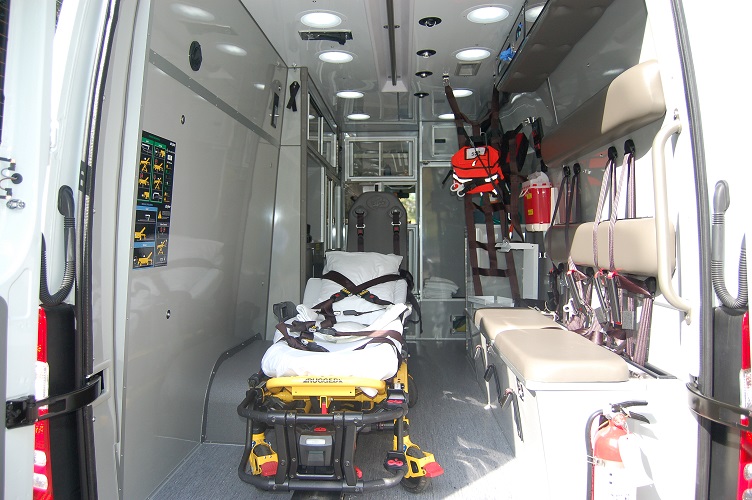 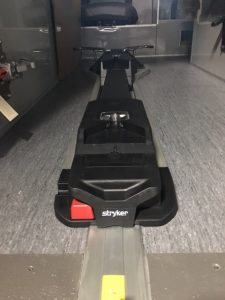 MANCHESTER — Recently, Aetna and ASM took delivery of seven Mercedes Sprinter Ambulances from American Emergency Vehicles (AEV). In an effort to keep up with the latest advancements in patient and provider safety, each new ambulance has arrived equipped with Stryker Performance-Load Cot Fastener Systems. In addition to securing the stretcher during transport, these devices offer guided loading and unloading, to increase both efficiency and safety. 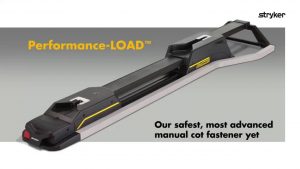 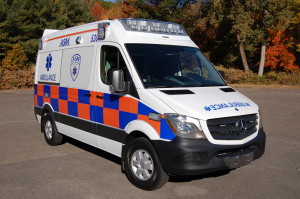 MANCHESTER — In October 2015 the newest version of ASM’s livery, decals and markings were on display on new additions to the fleet, awaiting state inspection.

The newest Sprinters have updated front-end styling including headlight, hood, grille and turn signal changes as well as a radical change in the emergency signal LED light bar. Operating fuel-efficient, safe and modern Sprinter ambulances is part of Aetna and ASM’s continued commitment to the communities we serve. 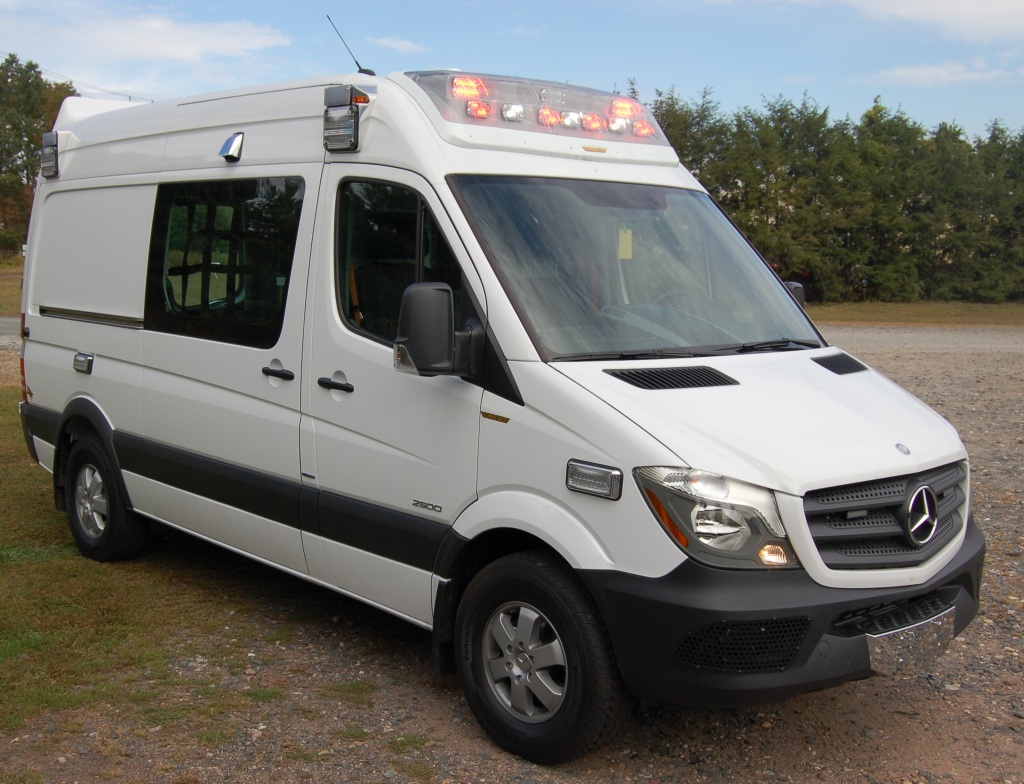 According to Car and Driver magazine, “The Sprinter’s most visible change is its front-end styling, which adopts Mercedes’ smaller, Renault-based, Euro-only Citan van’s flashier look. The grille is more upright than before, and gets Benz’s latest take on its signature three-slat design. A new pair of headlights flanks the grille, and features the same eyebrow-like (LED!) turn indicators that have proliferated throughout the Mercedes lineup. A fresh hood accommodates the new fascia and headlights, and it sits higher than before. Inside, there are new seat covers and upholstery, the steering wheel is thicker, and higher-spec models even get chrome air vent surrounds.”

The most distinctive change thus far for the 2014 ambulance model is the new style light bar.

As of April 2014, all Ford ambulances (except for the bariatric units) had been rotated out of service and replaced with Mercedes (or Dodge-marked Mercedes) Sprinter ambulances. The unmarked 2014 ambulance will soon be sent out to receive the high-visibility Battenburg markings, rear chevrons and company logos. Operating fuel-efficient, safe and modern Sprinter ambulances is part of Aetna and ASM’s continued commitment to the communities we serve. 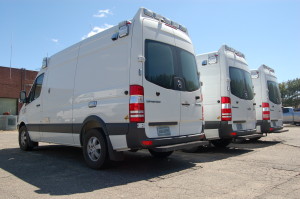 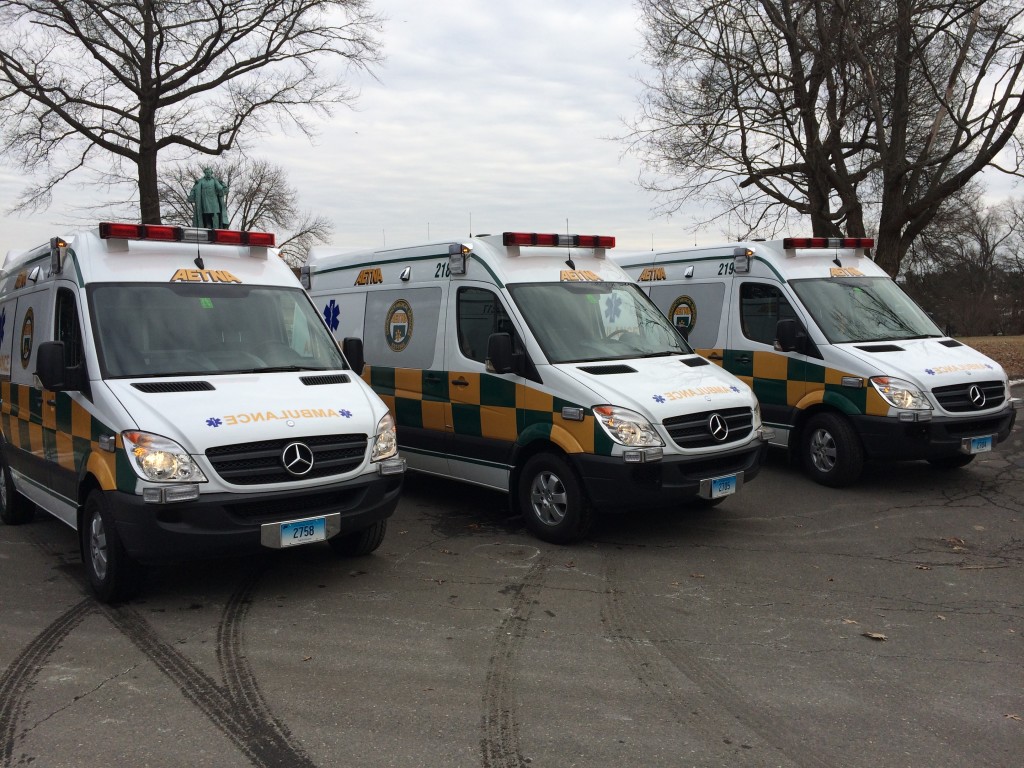 HARTFORD — On February 3, 2014 Aetna Ambulance will place in service three new Mercedes Sprinter ambulances for regular use and day-to-day operations.

The ambulances are not replacements. Instead they are new additions to the fleet resulting from an application to the Department of Public Health for expanded services last November. To demonstrate need in the application, Aetna cited continued, controlled growth, the need for expanded capacity and the length of time since the last application. 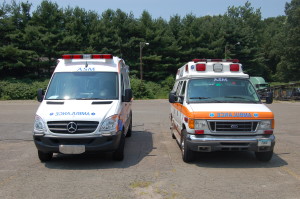 MANCHESTER — A local ambulance company has made a substantial investment in its fleet over the past four years, gradually replacing Fords with what is now a German/American emergency vehicle.

Ambulance Service of Manchester is among the first medical response companies of its size in the nation to switch its line to Sprinter ambulances, ASM spokesman Dave Skoczulek said Thursday. Sprinters had been a Dodge product, but are now part of the Mercedes-Benz line.

At the end of the month, the company will have replaced 27 of its 28 ambulances with Sprinters. The only remaining Ford will be the company’s bariatric ambulance, which is equipped to handle heavy patients.

The diesel-powered Mercedes ambulances get three to four miles more per gallon than the Ford E-350 vans they replaced, have more head-room can remain in service longer with less maintenance and are equipped with a stablity system that the Fords lacked, Skoczulek said. Another advantage is the Sprinter’s sliding side door, a roadside safety improvement over the Fords, which had swing-out side doors.

The Sprinters arrive from Germany as spare vans and are outfitted as ambulances by North Carolina-based American Emergency Vehicles. The Dodge and Mercedes Sprinters have cost as much as $20,000 more than the $56,000 Fords, Skoczulek said, “but we felt that the improved gas mileage and decreased maintenance was worth the investment.”

“We didn’t expect to have to change after decades working in Fords,” he said, “but when the landscape shifted, we didn’t see anything comparable to the Sprinters as an overall package.” Read the story at The Hartford Courant 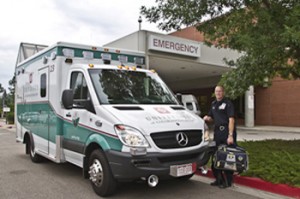 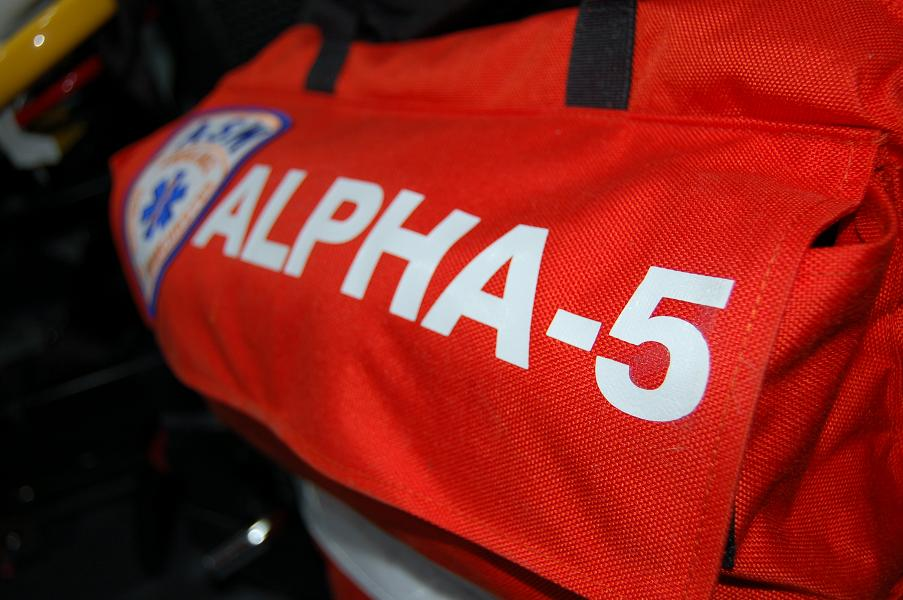 STAFFORD SPRINGS — As of January 11, 2013, the Johnson Medic, also known as Ambulance Service of Manchester’s (ASM) Alpha Five will be operating a brand new Mercedes Sprinter. The vehicle replaces the 2007 Ford that has been stationed at Johnson Memorial Medical Center for since it came into use. 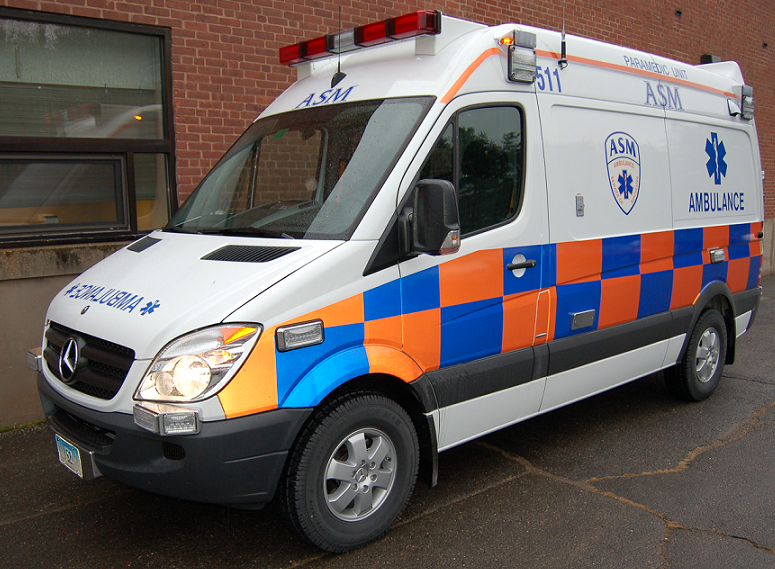 Alpha Five is the first Paramedic Unit at ASM to transition to a Mercedes and the last to have operated a Ford. All other Paramedic Units are operating Dodge Sprinters. To learn more about the Johnson Medic program, click here… END_OF_DOCUMENT_TOKEN_TO_BE_REPLACED

MANCHESTER — A side by side comparison of the Ambulance Service of Manchester’s Unit 514 as the Ford model is decommissioned in favor of the Mercedes Sprinter. Click on each picture to expand.

The three additional, unmarked ambulances will be added to the two already being held on-site as ASM. Four of these will soon be sent out to receive the high-visibility Aetna/ASM Battenburg markings, rear chevrons and company logos.

The Mercedes Sprinters will replace several aging Ford models, leaving the fleet with only four Fords at ASM and seven at Aetna as of this writing. 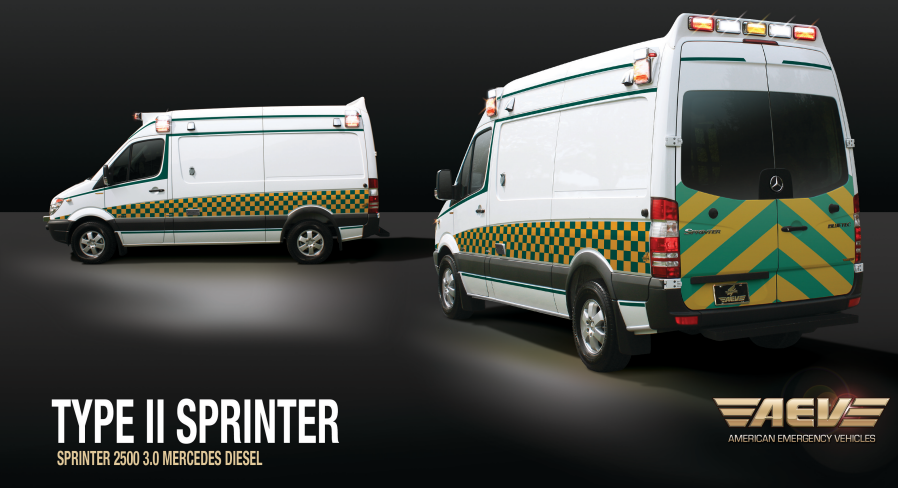 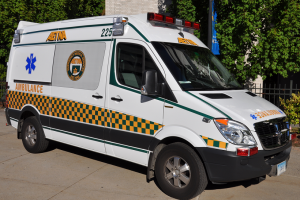 Activating ESP by initiating a tipping of the vehicle

Preparing the demonstration of Adaptive ESP at Giants Stadium

EAST RUTHERFORD, NJ — On August 7, 2012, members of Aetna and ASM’s Operations team and the Fleet Service Manager attended a training and demonstration session of the Adaptive Electronic Stability Program. ESP is standard on the Sprinter Ambulances that Aetna Ambulance and ASM operate. The training was held regionally at Giants Stadium in East Rutherford, New Jersey.

END_OF_DOCUMENT_TOKEN_TO_BE_REPLACED 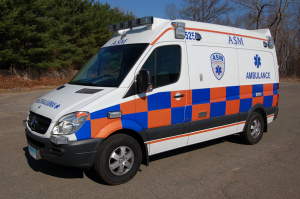 MANCHESTER — In an effort to further our use of cutting edge research in vehicle visibility design, ASM and Aetna have elected to adopt “full Battenburg” design on our newly added Mercedes Sprinter ambulances. 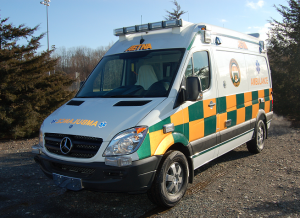 Since purchasing the first Dodge Sprinters from American Emergency Vehicles in 2009 we have utilized a custom-made smaller-block “Sillitoe marking” design with 4 x 4 inch retro-reflective blocks (as seen in the picture on our mast-head above).

Research has shown that larger blocks are even more effective in signaling their presense to the naked eye while the vehicle is in motion. END_OF_DOCUMENT_TOKEN_TO_BE_REPLACED

Early Praise for ASM’s Jason Bak on a Paramedic Intercept